“This is the real me. I am a humble person, a feeling person. A person who cares about others, who wants to help others. And I want to be involved in doing that for many, many, many years.”

“So I’m proud of what I have done. But I don’t need to come out and say ‘I helped this, I helped that’ because God knows everything and I feel very comfortable about that.” 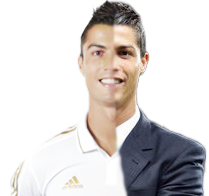 “Exactly. All around the world I have to deal with my fame. I can’t go anywhere without being recognised, which can be very hard — but doing this, I can use that fame. It is such a great feeling."

“This is what I want to do when I finish my career, to do something in the future even bigger than this.” 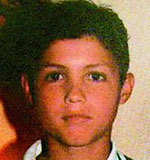 He is young, he is famous, he is a football Superstar, he is Cristiano Ronaldo. A famous person and a normal human been.

Cristiano Ronaldo was born in 05.02.1985 in Funchal, Madeira, Portugal, a small island off the western coast of the country, in the family of Maria Dolores dos Santos Aveiro and José Dinis Aveiro. His Mother was a cooker and his father was a municipal gardener. Cristiano received his second name "Ronaldo" after then - U.S. president Ronald Reagan, who was his father's favourite actor. He is the youngest member of a big family - one older brother, Hugo, and two older sisters, Elma and Liliana Cátia. His great-grandmother Isabel da Piedade was from Cape Verde.

Ronaldo grew up in a largely working class neighborhood, his home a small tin roofed shack that overlooked the ocean. His early life was shaped by hardship - afther his father dead in 2005, Ronaldo's mother worked as a cook and cleaning person. 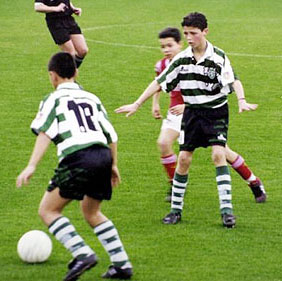 At the age of eight, his father was an equipment manager at amateur team Andorinha. This is Cristiano first play club. In 1995, Ronaldo signed with local club Nacional. Even at that age, Ronaldo was already recognized as a phenomenon - a kid who ate, slept and drank the game. After the winning ot the title, Ronaldo went on a three-day trial with Sporting CP.

Cristiano Ronaldo signed with Sporting Portugal in 2001. He became the only player ever to play for Sporting's under-16, under-17, under-18, B-team, and the first team, all within one season. In the summer of 2003 Ronaldo amazes everybody with his skills with the ball in match against Manchester United. Ronaldo was offered to Barcelona for less than the €15 million Manchester United paid, but the Catalan club could not afford him at the time as the club had already spent its budget on other players. 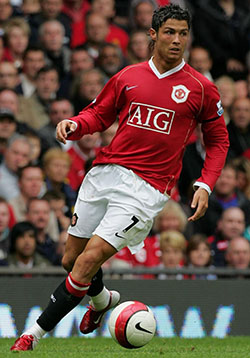 At the end of a summer 2003 Cristiano Ronaldo is transferred in Manchester United for over € 12 million a record fee for a player of his age. He is first-ever Portuguese player in the English Club. He received a shirt with number 7, which been worn by players such as George Best, Bryan Robson, Eric Cantona, and David Beckham. Ronaldo said: "the famous shirt was an extra source of motivation. I was forced to live up to such an honour."

He made his team debut as a 60th-minute substitute in a 4–0 home victory over Bolton Wanderers. He scored his first goal for Manchester United with a free kick in a 3–0 win over Portsmouth on 1 November 2003. Until Ronaldo is in the English club: He scored United's 1000th Premier League goal, He scored ten goals in all competitions, and fans voted him to his first FIFPro Special Young Player of the Year award in 2005. Ronaldo scored the third goal in Manchester United's 4–0 Football League Cup final victory over Wigan Athletic and that won him second trophy in English football. He broke the 20 goal barrier for the first time and picked up his first league title with Manchester United in season 2006-2007.

On 19 March 2008, Ronaldo captained United for the first time in his career in a home win over Bolton, scoring both goals in the 2–0 victory. In a 5–0 win over Stoke City on 15 November 2008, Ronaldo scored his 100th and 101st goals in all competitions for Manchester United, both from free kicks.

On 11 June, Manchester United accepted an unconditional offer of £80 million from Real Madrid for Ronaldo after it was revealed that he again had expressed his desire to leave the club. 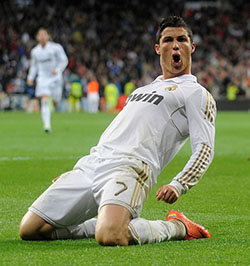 On 26 June 2009, Real Madrid confirmed that Ronaldo would join the club on 1 July 2009 from Manchester United for £80 million, after agreeing terms and signing a six-year contract. That makes Ronaldo the most expensive footballer in history.

Ronaldo made his Madrid debut on 21 July and one week later he scoring his first goal with a penalty in Madrid's 4–2 win over LDU Quito. An ankle injury suffered on 10 October, while Ronaldo was on international duty with Portugal against Hungary, kept him out until 25 November, so he missed both of Madrid's Champions League group stage matches against Milan. On 5 May 2010 Ronaldo scored his first Real Madrid hat-trick in an away game against Mallorca.

In summer of 2010, Ronaldo was handed the No. 7 jersey for Real Madrid, after the departure of Raúl Gonzàlez.

at the 2010 FIFA World Cup played in South Africa, Ronaldo captained Portugal, but the team was eleminated in the last 16 by future champion - Spain. 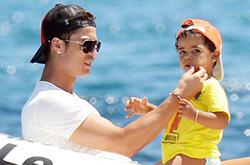 In 3 July, 2010, Ronaldo announced on his facebook page that become a father of a babyboy. The baby is named Cristiano Ronaldo Junior and is under his father protection.

Cristiano Ronaldo announced the news and requested for privacy and respect. Interesting fact is that until now the mother of the boy in unknown American woman. 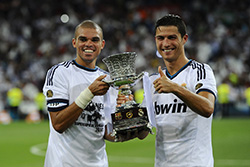 In season 2010/2011 scores 41 goals in La Liga Spain, which is record for him and which ensure him the winning of European Golden Shoes ones again.

The season 2012/2013 Ronaldo started by lifting the Supercopa de España with Real Madrid, scoring two goals in a 4–4 away goals aggregate win against Barcelona.

The success of the fenomen Cristiano Ronaldo continue through the season 2012/2013. On 9 April, Ronaldo scored twice to send Real Madrid to the semi-finals in the Champions League. 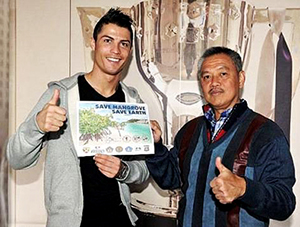 Not only a Superstar...

In the first weeks of September 2011, Ronaldo's physical performance was subject to scrutiny by world media, after Castrol released a television film named Ronaldo: Tested to the Limit. He was put to test in several fields, including mental and physical. Conclusions from the movie and doctors in the weeks following claimed that Ronaldo was one of the best athletes in the world, excelling in football and outstanding in almost every other category.

When the tsunami hit South East Asia, Cristiano flew to Indonesia to help those in need. He auctioned off a few stuff to help raise funds for charity. He hopes to get involved in more charity projects in the future because he believes his star status will help him reach out to others for help.

Cristiano Ronaldo has offered to bring a seven-year-old Indonesian boy who survived alone for three weeks after the Indian Ocean tsunami to England to watch the Red Devils in action. "When things are more calm it will be my pleasure to invite him to spend a few days with me, either at my house or at a hotel, so that he can attend a match," he told SIC television late Sunday.